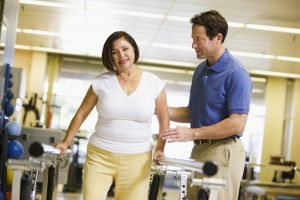 After suffering a stroke, survivors are able to walk but can have moderate to severe restricted mobility. A marked level of progress has been measured through physical therapist-assisted training especially when compared to that of robotic device assisted training. This is as according to an article published in the medical journal called, “Stroke.”

Which Is Better? Physical Therapy Or Robotic Assistance?

A leading doctor stated in an American Heart Association news release that they wanted to determine whether robotic devices, that guide limbs in symmetrical walking patterns, would enhance a greater improvement in walking symmetry and speed against that of traditional physical therapy.

Various stroke patients who had experienced partial paralysis on one side of the body for a period of more than six months, were monitored at a rehabilitation institute by the doctor and colleagues. The 48 patients partook in twelve 30 minute treadmill sessions with harness assistance to support the body weight.

An equal number of patients were randomly allocated to the robotic assisted therapy, providing continual symmetrical stepping assistance. Simultaneously, physical therapists trained the other half of the patients, only where necessary, to make sure continuous walking movement was taking place.

Ultimately, the enhanced walking speed of the patients treated by the physical therapists was twice as high in comparison to those treated by the robotic apparatus. The measure of progress, which was identified as being able to stand on one leg, found that the patients treated with the human touch – physical therapy – were substantially improved than those who were assisted by robotic means.

Feedback from the patients with severe restriction in mobility showed that they had experienced an enhanced physical function with guidance and help from the physical therapist. The improvements that were experienced were also sustained for up to six months.

In conclusion, the doctor and colleagues conducting the research found that in patients with chronic partial paralysis, that had limited independent movement; a marked improvement was shown when they worked with physical therapist-assisted training more so than those who were assisted with robotic apparatus. In saying that, research has shown that robotic device physical therapy may be more successful in stroke patients without any mobility. Interesting, right?